Know what DEATH symbolizes and how it influences your life 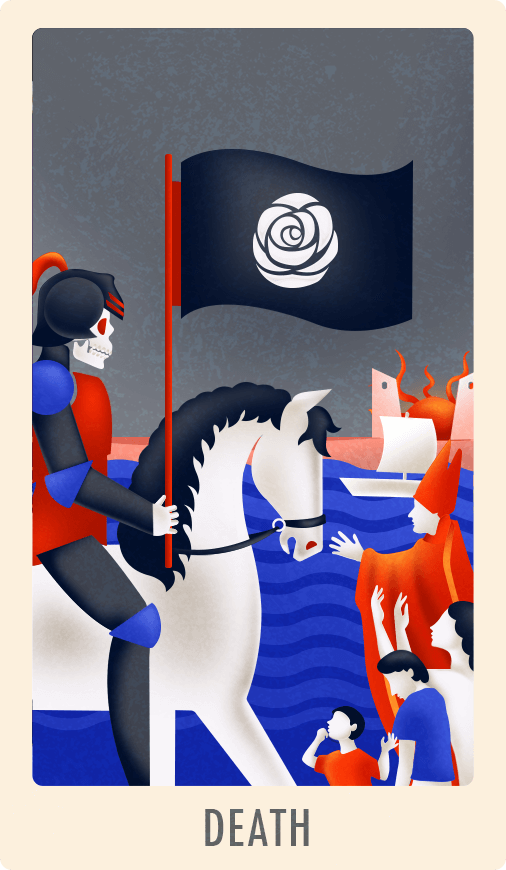 DEATH TAROT - WHAT DOES IT SYMBOLIZE

The Death Card is one such tarot card which confuses all. Interestingly, this card can have positive as well as negative implications. In this card, you will see a Skeleton (symbol of death), riding a white horse with a black and white flag in his hand. The white horse represents purity indicating nothing in this world is a better purifier than death. All things that die are reborn new and fresh. The Skeleton representing Death is wearing a heavy armor which depicts its strength and invincibility. It is a reminder that nothing in the world can win over or has more power over Death. The black color of the flag represents darkness and the white rose again symbolizes purity and immortality.

The Sun rising in the background, guarded by two pillars, also holds a prominent significance. While the rising Sun also represents immortality, the pillars depict the enlightenment that one needs to have to attain the same. The ferry in the river takes the souls across the river. The Bishop is paying his respect to the powerful Death. And, the people of every age group (man, woman, child), indicate that death is impartial. A grey background is also a testimony to this fact.

Death is the 13th card in a Tarot Deck. Death not only means an end to something but it also indicates new starts and fresh possibilities. It does not necessarily mean physical death, it also symbolizes an end to some interest or some relationship. Death card is ruled by Scorpio (Element: Water, Planet : Pluto)

Upright Death card is never about death. Rather, it is about change, transformation, endings and detachment. It indicates the end to a significant phase of one’s life and the start of something new and fruitful. Upright Death card certainly closes one door but only to open another. It wants you to let go of the past and accept this transformation. You can get new only after you get rid of the old.

This card also indicates a sudden change. You are unable to control this transformation and have no choice but to go with the flow. This does not mean a negative outcome. Such a change could pave way for a new direction. Death Card wants you to get past your old ways and methods, break old patterns, and move forward.

Reversed Death card depicts your inability to accept change. Even if you want to or are on the verge of bringing a transformation in life, but for some reason, you are unable to do so. There is something that is holding you back from taking this leap. You are attached to your past which is restricting you from grabbing the opportunities that could lead to new and fresh beginnings. You are against any kind of change in your life, even when you know you need it. Think and analyze. There is a high possibility that the change that you are resisting is for your own good.

Appearance of Death card in a love reading and its meaning entirely depends upon your present relationship status. This card symbolizes end of old things and beginning of new ones. If you are looking for love, then you might come across your soulmate. If you are in a relationship, then you might go through a break-up, but, for good.