Know what THE EMPEROR symbolizes and how it influences your life 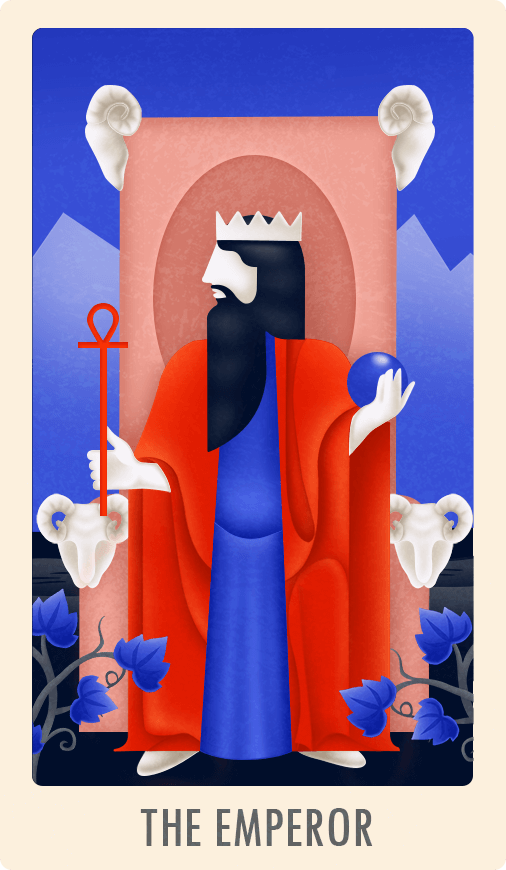 THE EMPEROR TAROT - WHAT DOES IT SYMBOLIZE

The Emperor is a complementing sign to the Empress. He is the symbol of masculinity, the father, the patriarch. Here the principal figure can be seen sitting on a throne that is furnished with heads of four rams, representing the zodiac sign Aries. He holds a scepter in his right hand representing the authority and power to rule. In the other hand is an orb symbolizing the realm that he watches over. His shaggy long beard represents the years he has spent in gaining invaluable experience. With time, he has learned how to exercise his powers in a more effective way. To serve his subjects and seek benefits for his people.

Behind him is the majestic mountain range that shows the greatness of his determination, leadership and aspirations to achieve much greater results. The King rules with an iron fist and in contrast with his nature are the fields of his kingdom filled with prosperity and brotherhood.

The Emperor is a symbol of strength and is a testimony to the fact that everything is under control. It represents stability in your life. All that you’ve achieved is the fruit of your labor. If you continue with the same intensity, there’ll be more good news coming your way. It shows that you’re leading the matters from the front and have the decisive say in everything in your life just like an emperor. You’ll have the complete authority to make up your own set of rules and personal boundaries.

It is all about power when it comes to this card. This a symbol of authority and regulation. The Emperor here is a visionary and thinks everything through. It shows you are working strategically, there is no funny business involved. For the Emperor, building a prosperous kingdom is as important as establishing discipline and order. To draw this card in a Tarot reading session signifies you growing and achieving greater heights. It ensures a successful future ahead given you continue chasing your dreams in a similar fashion to the Emperor, with dedication and grit. It can also mean that you’re going to be at the helm of affairs very soon. It can be on a professional front or in personal life. You may be called to take the place of the governing authority and restore order and management.

The Emperor in reverse is a sign of misemployment of power. This person can be imposing and dominating in his ways. He will not look to consider any input from anyone. A reverse Emperor draw is not a good sign by any means. It will bring along the nasty consequences of the authority that you have apparently abused. It also represents your inability to have a control over yourself, lack of teamwork and dismissiveness of an authority. It calls for changes, you need to bring discipline and develop a sense of respect for the authority. This card is a significant indication to the fact that you’re not flexible and need to learn how to bear changes and control.

The Emperor rules with an iron fist. A character played by your partner in your relationship, you are the second fiddle. But you need to remind yourself that it’s all for a good cause and your bond is getting only stronger. The emperor also tells that the roles may reverse with time.