Know what THE HERMIT symbolizes and how it influences your life 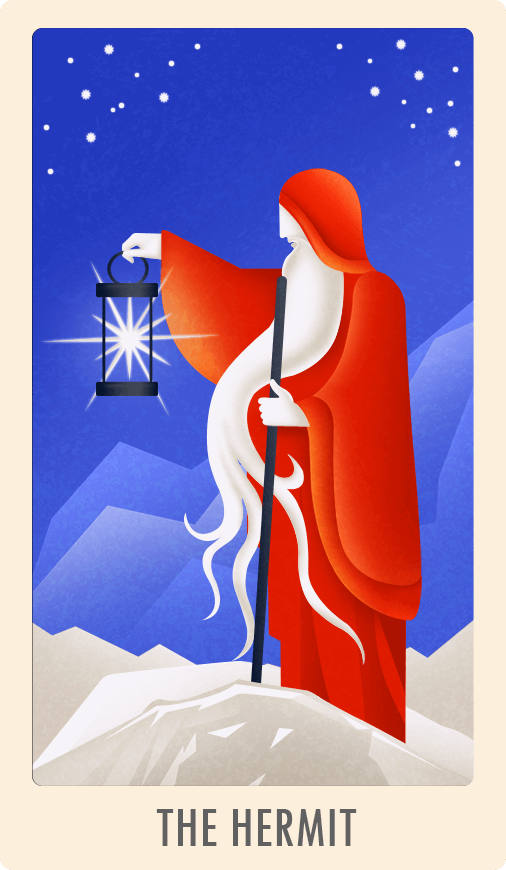 THE HERMIT TAROT - WHAT DOES IT SYMBOLIZE

The Hermit can be seen standing atop of a majestic mountain holding a lantern in his right hand. Mountains represent growth, attainment and success. The hermit has reached the very pinnacle of his intellect and is now looking forward to spread his knowledge amongst the less fortunate. He is also persistent with his commitment to continue onto the path of knowledge and enlightenment. The star in his lantern is six pointed representing the archetypal seal of Solomon, symbol of wisdom. Staff in the other hand is the symbol of the patriarch, indicating the exercising of power and strong authority. The posture of the Hermit is an indication to his ability of using the solitude to impart wisdom and awareness in to the world. The cloak of invisibility is his craft to preach which is not for everyone, only the earnest learners who are worthy of his wisdom deserve to be his disciples. Snow at his feet is a symbol of intellectual zenith. Number nine written in Roman notation represents accomplishment, achievement, and success. The entire imagery is for the fact that truth always prevails.

The Hermit indicates that you are in a self-introspection mode and seek answers that lie within. You are going through a hibernating phase where you have cut yourself from the outside world. This is a card that suggest self-exploration.

An upright Hermit in a Tarot spread suggests you’re pondering the matters that are right on top in your priority list. You are relying on all your mental faculties to get an answer from within. This card reflects that you’ve moved your attention inwards and seeking what you already know. The Hermit is a sign that you are inclining towards spirituality for mental peace which has eluded you for quite long. It inspires you to realize the true power of self-belief and channel your energy to more important things in life rather than unworthy matters. The hermit believes in helping the less fortunate with kindness. This Tarot shows that you have become more considerate and can look beyond the constraining aspects like criticism and selfishness. A simple interpretation of this Tarot is that one must respect the wisdom he carries. He needs to reflect on values and credibility to create his unique path to self-satisfaction. The Hermit introduces you to the wise experienced man that is hidden inside you.

A reverse Hermit can represent the far sides of the self introspection spectrum. You are either not thinking about your potential at all or you’re wasting too much time over it. The Hermit upside down inspires you to get closer to spirituality and give yourself enough space. If you recently have been through a traumatizing event or suffered a setback, it encourages you to get back on your feet and look deeper within yourself. The appearance of this card in a Tarot session may be a sign that you are holding yourself from meeting people or socializing. You’ve distanced yourself from people into the world of solitude, literally like a Hermit. You need to set up a personal connection and get in touch with yourself.

The Hermit suggests you to leave back all your emotional baggage that hampers your growth as a couple. It will help you gain integrity and you’ll feel more comfortable around your partner.