Know what THE HIEROPHANT symbolizes and how it influences your life 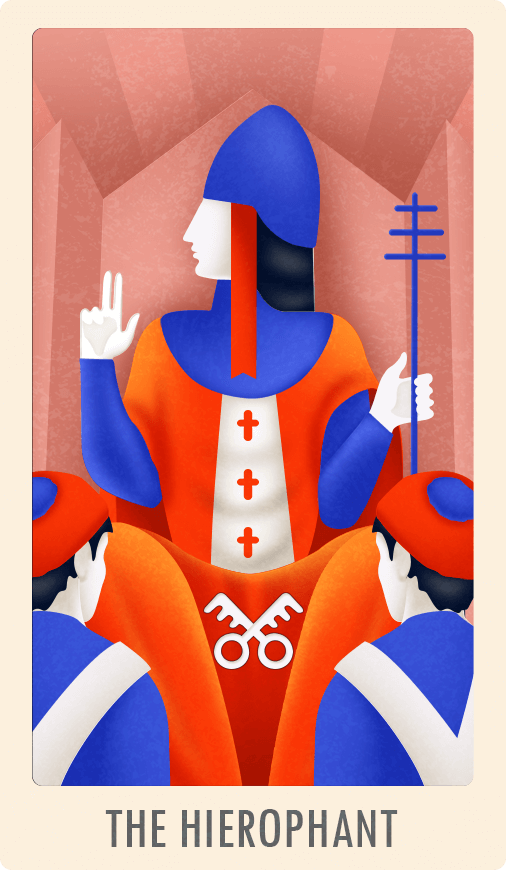 THE HIEROPHANT TAROT - WHAT DOES IT SYMBOLIZE

The Hierophant is also referred to as the ‘Priest’ or the ‘Pope’ in some Tarot decks. He is the male counterpart of the card the High Priestess and known by the name of Shaman in archetypal scriptures. It corresponds to the zodiac Taurus. The card depicts a holy figure sitting in a formal church setting. The religious character is wearing three elaborate vestments from his clergy representing three distinct worlds. Similar to the Magician, his right hand is raised, representing the invocation of blessings. In his left hand, he holds a triple Cross associating to the formal gear. The three parallel horizontal bars on the Cross symbolize Holy Ghost, the son, and the father. Next, to his ambo are sitting two henchmen representing the transfer of knowledge from the holy institution of the church to the learner. Through these henchmen, this card sheds light onto the path of knowledge and education. It is often associated with groups where there is a collective identity of an institution such as religious groups, schools, sports clubs, etc.

The Hierophant was a Pope in the medieval era representing traditional values and religious convention. It primarily represents orthodox customs like marriage in an arranged environment. The card lays emphasis on education and knowledge and the acolytes beneath the Hierophant is a sign of academic acquisition or intellectual growth.

The upright Hierophant is a symbol of the conventional approach. It suggests that you want to follow a set pattern and stay within the customary bounds. You will follow the standard steps to accomplish a task instead of utilizing your creativity. You will live up to the expectations. The Hierophant coming up in a Tarot reading indicates there is no need to change the state of affairs.

The Hierophant card indicates you are convinced to be a part of a collective group or an institution. It can be something along the lines of a religious group or as recreational as a sports club. It is clearly pointing out to the fact that you have identified with a group and are planning to learn more about it.

The Hierophant represents the institutional form of learning, especially something related to religious sects and their history. The pope on the Tarot card is a bridge between the divine and the mankind meaning connecting the spiritual world to the physical realm through the passage of divination. Everything that is sacred and have a virtuous value such as partnership, marriage, servitude, etc., come from the Hierophant.

A reverse Hierophant is a sign that you are bound within the constraining structures of regulations. You will be compelled to go against the authority. The reverse hierophant witnesses you implementing unorthodox ways or maybe a more innovative course of action to go about your business. In a way, it is similar to a teenager who is insurgent and wishes to question the very norm that runs the society. The appearance of this card is an indication that you do not wish to play by the rules and have a strong disagreement with the authority.

The Hierophant card simply indicates towards going after traditions that you’ve established over the period of togetherness. By the synergy of fine compatibility and incredible mutual respect, you are going to achieve something significant in your relationship very soon.