Know what THE MAGICIAN symbolizes and how it influences your life 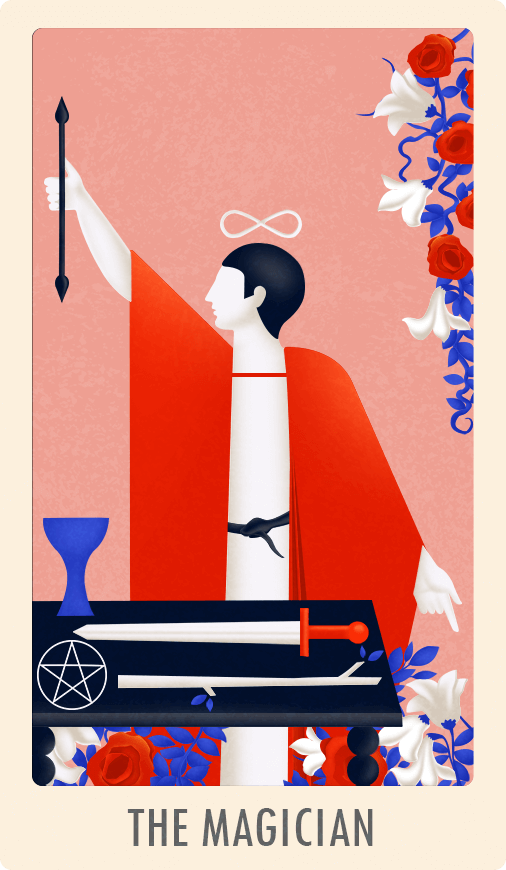 THE MAGICIAN TAROT - WHAT DOES IT SYMBOLIZE

The Magician card in Tarot has a tremendous representational significance. The principal figure is a man wearing a robe. His one hand is pointing towards the sky while the other to the ground. He is trying to bring our attention towards the extremities - as much above as below. The magician is numbered one, the point from where everything begins. Here, the Magician is a crossover between the spiritual energy and the human. It depicts how the Earth(below) reflects the skies(heavenly above), how the outside world reflects from within and how the good reflects the evil. Just above his head is a sign of infinity, symbolizing eternal universe. So is the snake around his waist that is biting its own tail. On his table lies all the four Tarot suits, each representing the four antediluvian elements of nature namely Air, Earth, Fire, and Water. These elements correspond to the heart, soul, mind, and body in the process of Genesis. His white robe is the symbol of purity and chastity whereas the cloak around his shoulders is red in color depicting the worldly acquisition and intellect. In the stack of flowers on his heels, lies another beautiful representation of this inherent duality between opposite sides of the life spectrum, in the form of a mix between red and white lilies.

When a Magician card is drawn from the tarot deck, it represents the skills, capabilities, and accumulations that are endowed on the querent to achieve success. It essentially suggests making full use of the resources rather than delaying gratification. The Magician also represents transformation and new life.

A very basic interpretation of an upright Magician card would be the time when you have the energy to kickstart a new lifecycle. You have all the blessings from the heavenly above to realize your dreams. The Magician card witnesses you going full throttle on your goals and in the course making the most of all the resources and capabilities that are at your disposal. You’ll come up with new and more innovative ways to counter all your problems.

The magician card suggests you lay all your concentration on a specific task that you’ve been wanting to get over with. You need to channelize your abilities, focus, and resources to that particular goal. It also warns you to stay wary of all the potential circumstances that can put a dent in your confidence.

A reverse magician means it’s time to make some changes. It suggests you’ve been in bad shape lately and it is about time that you work your way back to normal. There may be confusion and indecision playing tricks with your mind, but you need to be very critical of your choices. It also shows that you’re not putting your capabilities to good use. You need to find better opportunities so that you can maximize your talent.

The Magician in a Tarot reading regarding love represents the power of communication between you and your partner. If you’ve just been through a rough patch and it’s building doubts about the future of your relationship, then you are overthinking. Relax, as you’ll be able to get over it soon. There is nothing to worry about. You two look absolutely fine.