Know what THE WORLD symbolizes and how it influences your life 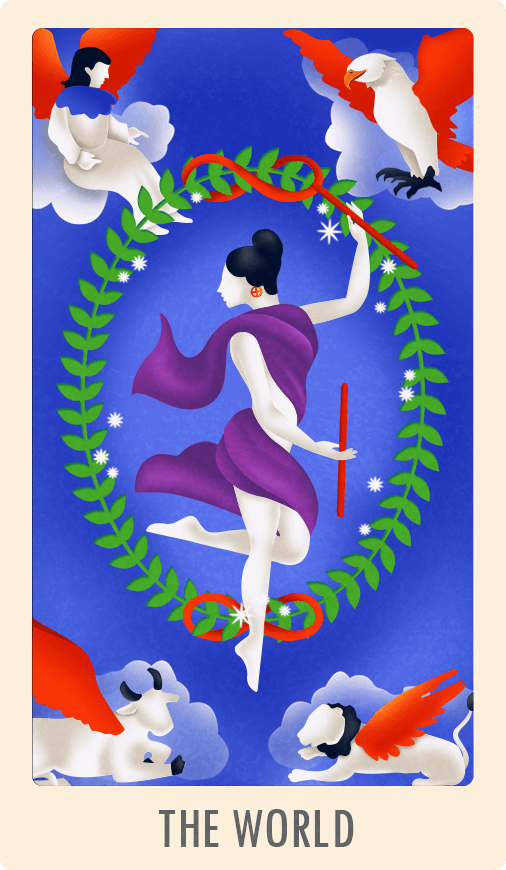 THE WORLD TAROT- WHAT DOES IT SYMBOLIZE

The principal figure in the World card is a dancing lady, enjoying the completion of a long and tiring journey and also fresh new start that awaits her. Similar to the Hanged Man, she has one leg crossed over the other. She is her female counterpart. She looks in the exact opposite direction to him. In both her hands are wands that symbolize stability and growth. Around her is a ring of green leaves representing success and accomplishment. The red ribbon on the either ends in the shape of infinity is to inspire others and achieve greatness together, like a collective. Inside the wreath of glory are stars scattered around the lady depicted as a symbol of enlightenment and wisdom. The four creatures on the corners of the card are similar to the Wheel of fortune and in the very order. Surprisingly, this card is pretty similar to the Wheel of Fortune, representing the cyclic continuum of life and human psychology. The four creatures - lion, eagle, angel, and bull relating to the four zodiacs Leo, Scorpio, Aquarius, and Taurus. Also, symbolizing the four seasons, four elements, and four corners of the Universe. Jupiter rules the Wheel of Fortune.

The world represents a full circle of life. A tiny little break before starting anything new. It indicates a significant change that is about to take place in life in the form of transition from one cycle to the other. This card comes with a promise that even if you have just finished with something big, there are still new experiences waiting for you.

Much like the pictorial depiction, this card represents culmination, progress, and accomplishment. All your hard work has finally paid off, and you have reached the final destination of your journey. You have completed a full cycle. All that faced along the way be it setbacks or really tough times, they have only made you better. You are coming out as a wiser and more experienced individual much ahead of where you were when you started the journey. All that you have planned has turned out exactly how you wanted. Everything is going your way, and it looks like you cannot do anything wrong. There’ll be praises all over, and you might feel a bit overwhelmed, but it’ll pass soon, and you’ll be back to normal. This card also indicates that you’re developing a sense of belonging. You know what’s your impact on your surrounding and how it can affect you back. An upright World card is a good sign if you’re looking to start something new.

An upright World card represented completion and success, but when reversed, it means exactly the opposite. Even though you’re trying hard enough to get over with your goals, you’re nowhere close to completion. Even if you get close to finishing it, somehow your attention slacks off and you get derailed. Stay on course and keep your focused intact.

The world represents coming together of two beautiful souls to embark upon a lifelong journey. This card is a sign of commitment that you have been eluding from a long time.